Let’s discuss these structures one by one:

Nose:  Nose which is visible outside is external portion of nose and internal portion of nose which lies inside skull is called as nasal cavity. External nose has hyaline cartilage that’s why it is somewhat flexible in nature and internally it is lined by mucous membrane. It has two openings called as external nares or nostrils. Nostrils lead to nasal cavity through nasal passage. External nose helps in warming and filtration of inhaled air.

Nasal cavity: It has external nose/nostrils in anterior part and posteriorly, it merges with pharynx with the help of 2 openings called as internal nares.

Pharynx: It is commonly called as throat. Length of pharynx is about 13 cm extending from internal nares to larynx. Pharynx is superior to larynx in position. 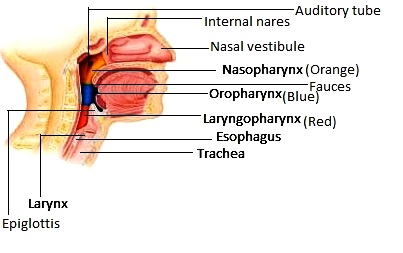 Larynx: It is also called as voice box or sound box. It connects laryngopharynx with trachea. It is present anterior to esophagus, in the middle of the neck. It extends from C4-C6, i.e. fourth to sixth cervical vertebrae.

Trachea: It is also called as windpipe. Trachea is located anterior to esophagus. It is a straight tube of length 12 cm and 2.5 cm in diameter; and extends form larynx to fifth thoracic vertebrae (T5)/ mid-thoracic cavity. At the level of T5, trachea divides into left and right primary bronchi. 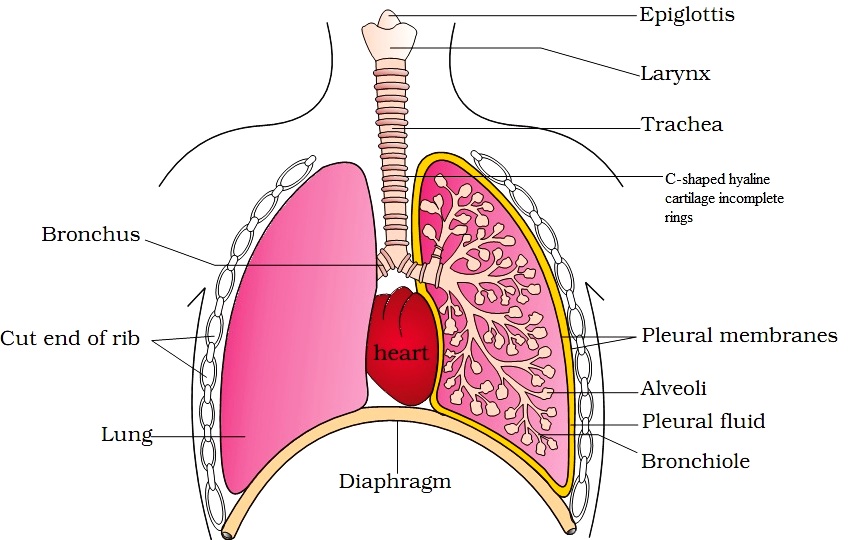