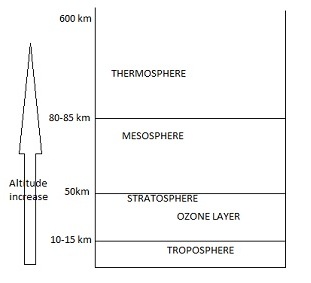 Ecosystem is considered as a functional unit of nature, where living organisms interact among themselves and with surrounding physical environment.

ATMOSPHERE:  Thin spherical envelope of gases surrounding the earth’s surface. Nitrogen (78%), and oxygen (21%) make up the bulk of the earth’s atmosphere. Other gases include Argon, CO2 and various trace gases. Troposphere: Lowest atmospheric layer about 10-15 km thick. Most clouds and weather are found in the troposphere. It is the layer in which we live. Right mixture of oxygen with nitrogen, carbon dioxide, and other rare gases allow organisms to survive in troposphere. Apart from nitrogen, carbon dioxide which makes up 99% of air in troposphere, 1% of the air includes water vapor, Carbon dioxide(CO2), and Methane(CH4), Nitrous oxide (N2O), all of which are called greenhouse gases, because they are transparent to sunlight but trap heat radiating from Earth’s surface back toward space and thus warm the lower atmosphere. Temperature drops as you go higher in the troposphere. Tropopause separates troposphere from stratosphere.

Stratosphere: Next to troposphere is stratosphere about 35 km thick. It extends from 17–50 kilometers above the earth’s surface. Stratosphere contains a protective Ozone layer surrounding earth. Ozone layer absorbs harmful ultraviolet radiation of sun to support life on earth. Temperature increase as we go higher in stratosphere. Stratopause separates stratosphere from mesosphere.

Mesosphere: This layer is next above the stratosphere; extend from 50 to 80 km above the Earth’s surface. It is a cold layer where the temperature generally decreases as you go up in mesosphere. Meteors burn in this layer of atmosphere. Mesopause separates mesosphere from thermosphere.

Thermosphere: Extends from 80 km above the Earth’s surface to outer space. Temperature is very hot in this layer, as high as thousands of degrees. Satellites are present in this layer. Ionosphere is a part of thermosphere.

Above thermosphere is Exosphere, extends from about 600 km and above.

HYDROSPHERE: It consists of all of the water on or near the earth’s surface. It is found as liquid water (on the surface and underground), ice, and water vapor in the atmosphere. Water covers about 71% of the Earth’s surface. 97% of the earth’s water is in the oceans remaining three percent is fresh water.