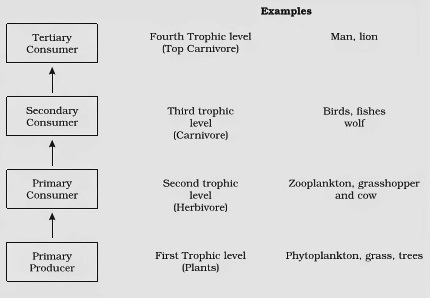 In an Ecosystem, every organism is assigned a place according to their feeding relationship with other organisms. Based on source of their nutrition or food, organisms occupy a specific place in the food chain that is known as their trophic level or feeding level. Organisms at each trophic level transfer energy and nutrients from one trophic level to another in an ecosystem. Trophic Levels in an Ecosystem

Decomposers is a subcategory of Detritivores. Mainly fungi and bacteria are decomposers. Decomposers help in break-down of dead organic matter of plants and animals.. They do so by secreting digestive enzymes that increase degradation of dead organisms into simple organic and inorganic compounds, water, minerals and nutrients like carbon. These simple forms are thus returned by decomposers to the soil, water, and air for reuse by producers.

Omnivores such as pig, crow, fox, cockroach, and humans, feed on both plants and animals. So omnivores feed on multiple trophic levels.