Human circulatory system consists of heart, blood and blood vessels. Heart has unique properties to circulate /pump blood throughout the body and it works continuously without rest.

NOTE:  Mediastinum is the region between (sternum – vertebral column), (first rib to diaphragm) and between both lungs. Mediatinum is the division of the thoracic cavity.

NOTE: Inflammation of the pericardium is called as Pericarditis. Occur due to increase in pericardial fluid.

Right ventricle- It forms major anterior surface of the heart. Internally it has series of muscular ridges called as trabeculae carneae, made up of cardiac muscle fibres. It helps in conduction system of the heart. 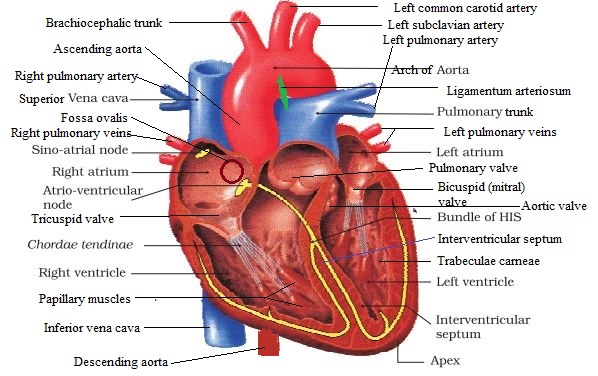 Left atrium – It forms the major portion of the base of the heart. Left atrium has left auricle in which pectinate muscles are present. Both anterior and posterior wall of left atrium are smooth.

Left ventricle– It forms the apex of the heart and it is the thickest chamber of the heart.

NOTE: 1) Veins always return blood to the heart, while arteries always take blood away from the heart.

2) Ductus arteriosus – it is a temporary blood vessel present during fetal life which shunts blood directly from pulmonary trunk into aorta. As a result only a small amount of blood enters into fetal lungs, which are non-functional before birth.