Blood vessels form a closed system of tubes that carries blood away from the heart, transport it to the various tissues of the body and then returns it to the heart. Blood vessels help in delivering oxygen, nutrients, and hormones to the tissues and carry away carbon dioxide and wastes from them.

TUNICA INTERNA or TUNICA INTIMA- it forms inner lining of blood vessel. It remains in direct contact with blood. It forms lumen (interior opening) of vessel. It also has 3 layers in it- innermost endothelium (simple squamous epithelium), middle layer is basement membrane which provides physical support and outer is internal elastic lamina which has swiss cheese like appearance and help in diffusion of materials. 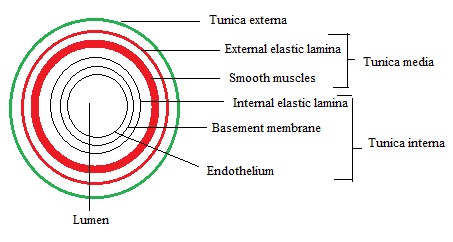