1) SA node or Sinoatrial node- it is located in the right upper corner of right atrium near the opening of superior vena cava. Nodes are also special patches of cardiac muscle fibers. Cardiac action potential is generated from SA node. SA node can generate the maximum number of action potentials, i.e., 70-75 per min. So, it is responsible for initiating and maintaining the rhythmic contractile activity of the heart. Therefore, it is also called as pacemaker.

Each action potential generated from SA node travels throughout both atria via atrial muscle fibers to undergo contraction of both atria simultaneously.

4) Purkinje fibers- Left and right bundle branches give rise to minute fibers throughout the ventricular musculature of the respective sides called as purkinje fibers. These fibers conduct action potential rapidly across the ventricles leading to their contraction. 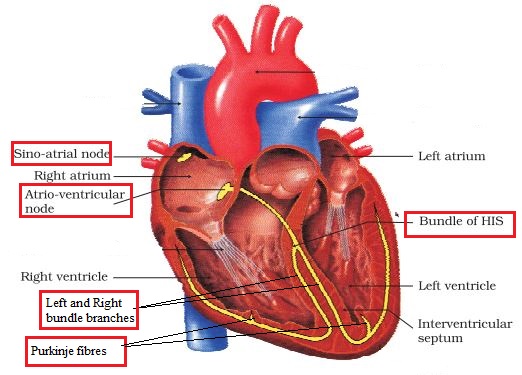